WeChooseTheMoon.org is an interactive re-creation of the historic Apollo 11 mission to the moon, inspired by John F. Kennedy’s grand vision. A re-creation that over 3.5 million people have taken to date. A million of which visited on the very first day to experience in real time as all the world did in 1969. 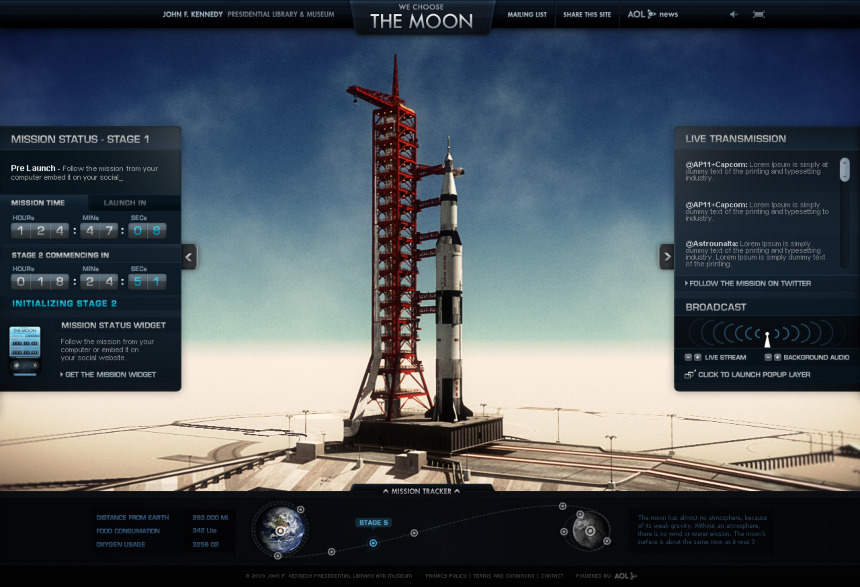 We Choose The Moon Homepage

During my time at Domani Studios I had an amazing opportunity to work with the Martin Agency and the JFK Library to create a piece of history that the would stand the test of time. We Choose The Moon has and still doing that (provided you still use Adobe Flash).

The creation of this site was unlike any site I have worked on. We needed to build a site that would in effective handle 1MM concurrent users that are watching the Apollo mission in real-time. We did this through the use of 200 servers provided by AOL, Akaimai for video streaming, and Limelight for mp3 streaming of the actual 4 days of audio recorded during the actual mission. If managing all of that wasn’t enough we had to make sure it all synced together. Luckily we got it right, were featured on CNN, and were the #1 trending topic on Twitter for about 6 hours.

Cannes Entry We won big at Cannes with 5 gold lions. A number unprecedented in digital at the time. This was the entry video

Awards There are some of the many awards we received:

Complete Launch Sequence This is an export of the complete motion graphic launch sequence.